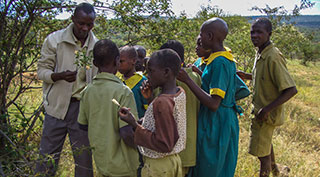 Lessons Within This Unit

The goal of this curriculum guide is to provide a coherent set of lessons and projects that will connect Samburu and Laikipia Maasai children to their environment. In this way we hope they will understand the connections between wildlife, their landscape, and their lives. All the children live in pastoral communities with a long tradition of using the environment to sustain themselves and their herds. Recently, increases in the number of people and livestock have increased habitat use and thus have put pressure on wildlife, especially the Grevy’s zebra whose historical range was centered in these lands. The lessons and projects in this guide should teach students about the world around them and how it works and how the presence of people impact other species living there and the overall functioning of these habitats. The conservation clubs meet after school and should provide active learning experiences, since the school day is mainly spent reciting and memorizing facts.

The workshops that were held to introduce basic ecological and conservation concepts to school teachers and community members, who will serve as important liaisons between the community and the schools, taught the participants key concepts and provided active field experiences. To build upon these ideas, the curriculum guide is composed of five themes:

We thank all of our advisers, as well as the Saint Louis Zoo, San Diego Zoo, Oregon Zoo, Columbus Zoo, and John Ball Zoo, all of whom have contributed to the funding of this project.

Finally, we dedicate this curriculum guide to the memory of James Munyugi, whose inspiration and tireless efforts to forge the links to the communities made all of this possible.

Written and Compiled by: Nancy Rubenstein and Laurie Thier


Lessons Within This Unit

Lesson 1: Parts of the Lessons